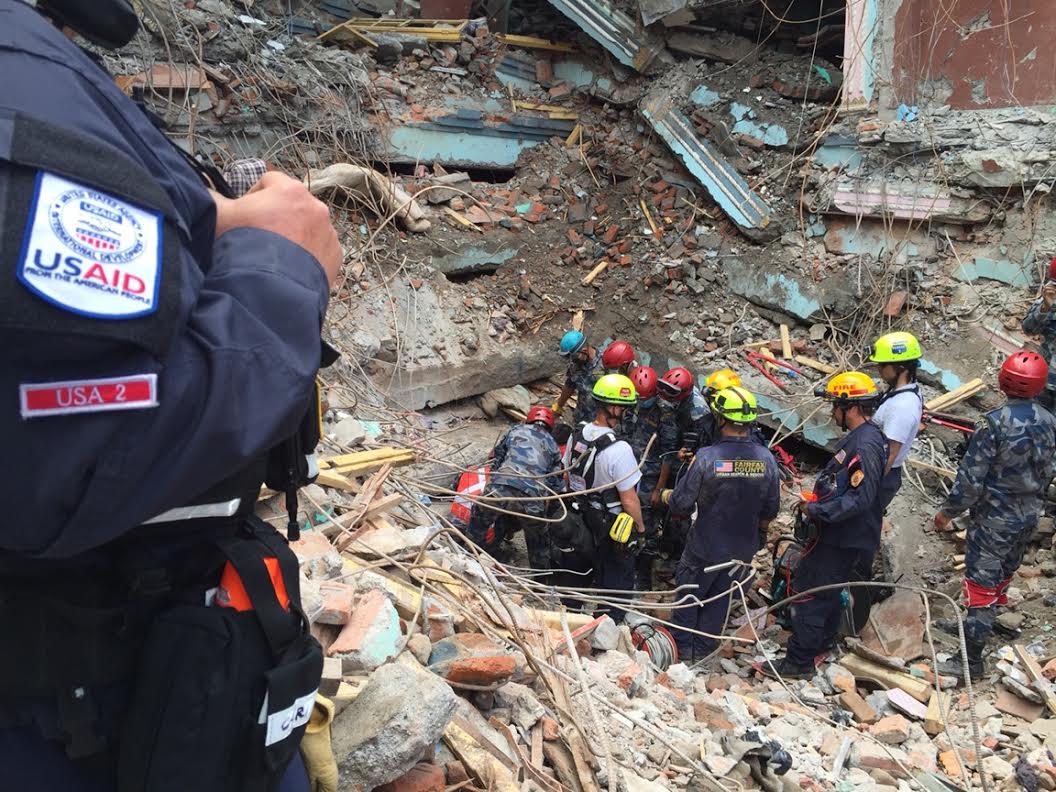 In April 2015, a magnitude 7.8 earthquake struck approximately 48 miles northwest of Nepal’s capital city of Kathmandu. The earthquake and subsequent aftershocks—including a magnitude 7.3 earthquake on May 12—resulted in nearly 9,000 deaths, damaged or destroyed more than 887,000 houses, and caused widespread damage to public infrastructure, including water systems and health facilities.

The DART demobilized on June 9, 2015, but USAID disaster experts remain in Nepal.

USAID remains committed to supporting earthquake recovery efforts in Nepal, including earthquake-resistant infrastructure and reconstruction, food security and livelihoods, and the protection of vulnerable populations.

For more information on the U.S. government response to the 2015 Nepal Earthquake, visit www.usaid.gov/crisis/nepal.

Details About the 2015 Nepal Earthquake Response

How You Can Help

When disasters occur anywhere in the world, Americans generously offer assistance to those in need. Decades of experience in disaster relief and recovery have shown that the best way to help people affected by disaster is to make cash donations to reputable relief and charitable organizations on the ground. These groups work closely with affected communities, know what people need and how to strengthen recovery efforts.

Organizations listed on the resources below are experienced and are participating directly in relief efforts. If you would like to know more about organizations you are considering for support, you can find detailed financial and programmatic information at: GiveWell, Charity Navigator, Charity Watch, and the Better Business Bureau.

InterAction is an alliance organization in Washington, D.C. of nongovernmental organizations (NGOs). Our 180-plus members work around the world.
GlobalGiving is the first and largest global crowdfunding community that connects nonprofits, donors, and companies in nearly every country around the world.

USAID created the Center for International Disaster Information (CIDI) in 1988 one month after Hurricane Gilbert made landfall as a Category 5 storm that affected 10 countries. An outpouring of unsolicited donations took up space needed to stage and deliver life-saving relief supplies, and USAID and other responders spent valuable time managing unneeded clothing, expired medicine, and other non-critical items. USAID established the Center to educate the public about the advantages of giving monetary donations to relief organizations and the downside of donating unsolicited material goods www.cidi.org. USAID’s Office of U.S. Foreign Disaster Assistance (USAID/OFDA) leads and coordinates the U.S. government’s humanitarian assistance efforts overseas, responding to an average of 65 disasters in more than 50 countries every year. Learn More About USAID/OFDA